Female
Sonnie is the titular protagonist of the first episode of LOVE DEATH + ROBOTS, Sonnie's Edge. She participates in so-called "beastie" fights and seems to be unbeatable.

Sonnie's backstory was not explored in her episode, only that after brutally tortured and left for dead by several estate men, her consciousness was moved to her beast Khanivore by her friends. Although her human body subsequently became brain-dead as result, Sonnie can still control it through a chip which links both bodies, a control which is an inversion to her rivals who guide their respective beast in duels. This allows her to keep her rivals in the dark about her fate. 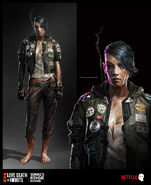